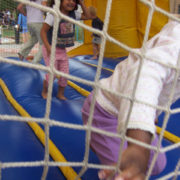 For her AND her grandfather
Center Street Post-PARP Discount