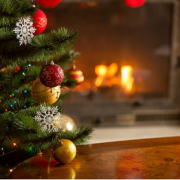 Families say they like our Treasure Hunts for the Holidays because it slows down the gift-giving and makes it more fun:
“Rather than ripping through the wrapping paper, saying thanks and quickly looking for another, they went from clue to clue. It forced them to take turns and even enjoy each other’s presents. The hints that excited them but didn’t give aways the exact gifts worked really well.
I think the hunt is going to be a tradition!”

This was the plan when we included holiday Hunts, because this is what we did… Okay, I’d like to say we did it all the time, but we were exhausted from gift buying and only made a treasure hunt for the gifts one and one-half times (that is the second time I fell asleep and woke up cut it off after a few of the gifts!) Luckily for the rest of you we’re here to do it for you.

That holiday, that is, that 1.5 holidays, I found there were 3 advantages to throwing a treasure hunt onto the other festivities:

Now, if I’m being honest about my shallowness, I should also be honest about the two limitations we have with gift giving treasure hunts. Both actually have their advantages, but they do make a difference:

The first is the limitation on the usual movement and ease of setting up.  Usually families want to stay by the tree or other such setting, so a massive hunt doesn’t work for all.  There are those who enjoy sending there kids clear across the house and rooting through hampers while enjoying a few minutes for quiet sips of coffee, but that also involves putting out those clues when you may already be very busy.  So for most, clues just go under the presents or a stack of clues is handed together or one at a time.

The second issue is that we need time to make the clues and have them approved by you, so last minute unplanned gifts cannot be fully described in the clues.  Last minute planned but not yet purchased gifts are easy and omitted gifts can have the clues removed (just be careful to never let them see them or disappointment will follow). We usually create a few clues that just lead to packages without information about what’s in them, and if they need explanation parents can talk to their children….but do be sure to get your sips of coffee in!

For her AND her grandfather