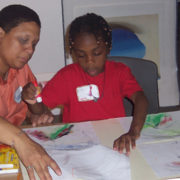 Art without loneliness. We all tend to think of creativity and creating as solo activities, but very few creations involve only one person and many of those generally are based on an assignment or a specific audience. The Mona Lisa was a consignment, as was nearly every great piece of architecture—and certainly all of those relied on contractors and workers. We praise fantastic chefs on a spectacular meal but (with the exception of TV competitions that usually turn out bad) they all have sous chefs and other staff. And this is ignoring the fact that the paint the artist brushed, the lumber the architect constructed, the grains and meats the cook sautéed, were all prepared and created by others.

The team. Not only does Steven Spielberg now have crews of hundreds, college filmmaker Spielberg had a crew, and, in fact, at age 13 he won a prize for a film, which had a cast of classmates and help from others. There is nothing embarrassing or less creative about getting help from others or building on an idea of others. Plagiarizing and presenting it as your own in public may be another story, but, then again, most sitcoms rely on the “restaurant meal faked as home cooking” or “Cyrano providing love poems” episodes. (So, as much as we want others to know about our treasure hunts, if you want to take full credit who are we to complain?)

Parenting help. Parental creativity has grown tremendously in the last 50 years. Colored bumpers and murals on the walls were just the start of baby rooms’ decorating. Birthday parties have jumped a lot further than just “Pin the tail on the donkey” evolving to “Pin the tail on Donkey from Shrek.” Ideas from parenting magazines or Martha Stewart or seen in shows are infinite… but so are the variations and creative way that families take these ideas. A carnival party that can’t afford a pitch and dunk tank, can easily substitute a “hit the face through the board” with a sponge activity; and can draw any thematic outfit around that face.

Team building. Likewise, when companies, or schools, or reunions, or friends get-together for activities, there is little reason for the coordinators to kill themselves with hours of brainstorming. Whether it is a hike, a “room escape,” a campus olympics, or a trust game, there have been others who came before. It is interesting to mix it up and give a new twist, but to think you have to reinvent the wheel, is expecting too much.

“Leonardo, we’re not impressed; paint from your imagination!”
When people hear of our website, some ask “well, couldn’t I do that myself?” and the answer is “Absolutely yes.”  While we think we do a particularly good job of making our Treasure Hunts and believe we will come up with fun ideas you might never think of, we believe we are also providing you something fun that frees up your time and your own creativity. For many it is this year’s event, or this season’s, or a recurring one (our favorite!). For others it is only part of a bigger set of plans for which we can either follow their theme or stand as one in a series of activities. We have never heard of someone saying to a host afterwards “how come you didn’t do it all by yourself?”

After all, treasure hunts are only part of being a pirate.