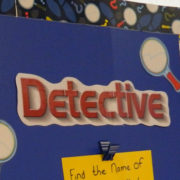 Connections. When studying film you learn how important and overriding sound and ordering can be. You probably thoroughly understand the theory that walking through a forest can feel peaceful, uncomfortable, all the way up to terrifying, based on background music. And most already recognize that dialogue can turn a serious scene into humor as seen in “Mystery Science Theater 3000” or “Whose Line Is It Anyway” (with voice-overs replacing the original script with silly conversations). What is surprising is how easily random images can seem connected by being cut together and then adding a narrator, soundtrack, and/or dialog.  This can be accomplished without “telling” (extensive exposition or recapping) but with “showing” and conversations or moods.  As we are working on a large upcoming Treasure Hunt, we realized this possibility can easily spread to our fun or to any type of party/get-together.

Certainly, a theme party is nothing new. Basing our hunts and clues on the themes of a birthday party or the interests of a hunter also is something we are familiar with.  In this case, however, we are making a story and fitting clues into it.  And, as with all creativity, there are numerous occasions when one of these—the story or the clue—will naturally feed the other as if they were meant to be together and were just facts in nonfiction.  Here, we are making a mystery with teachers as detectives, and when we needed to distinguish between the ages of their students, we realized the natural joke of Detective First Grade vs. Detective Kindergarten.  We were told who would be involved in the story and, from their characteristics, new characters were born adding to the plot. The clues we were making on one theme (geography) were incorporated into the story by being a key plot point (travel).

There is a definite new level of work in taking a game and making it into a themed story.  To such an extent that we have now added “Storyline” as a feature you can affordable add to your hunt. And it definitely needs to have some back-and-forth to make it work; this is why “personalized” is at the heart of our business.  The potential for fun, humor, and something unique is an absolute.